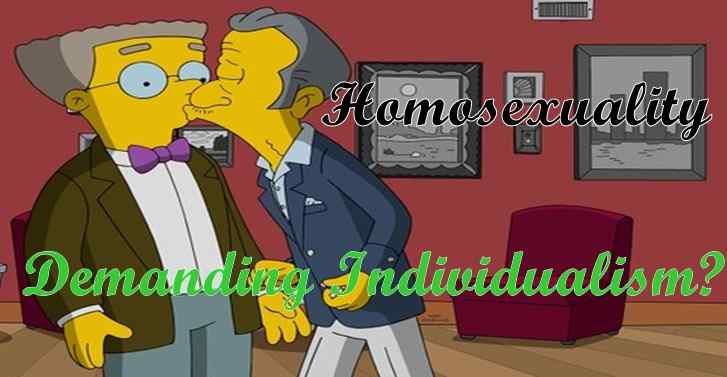 The law always goes with the life of people, not against the life of people. Homosexuality demand of individualism rather than social morality. The term âhomosexualityâ was invented in the late 19thÂ century by a German psychologist, Karoly Maria Benkert. The term heterosexuality invented later in the same century to contrast with the earlier term. The right to love is a part of our life. In some countries criminalizing homosexuality lower the status of some people. In a certain culture based on homophobic attitude which makes it impossible for victims to access the judgment.

Homosexuality is accepted in some countries. The cultures influenced byÂ Abrahamic religions, theÂ lawÂ and theÂ churchÂ establishedÂ sodomyÂ as a transgression against divine law or aÂ crime against nature. According to the form of literary works, art objects, andÂ mythography materials in western documents concerning same-sex relationships are derived fromÂ ancient Greece. Studies say that it accepted in some forms in ancient Greece. Â No societal notions of heteronormativity regulate libertines based on sexual orientation that marked them as less than citizens as or less than human. Laws of a country should be in consonance with its modern ethos it should be sensible and easy to apply. Many historical figures, includingÂ Socrates,Â Lord Byron,Â Edward II, andÂ Hadrian,Â have had terms such asÂ gayÂ orÂ bisexualÂ applied to them; some scholars, such asÂ Michel Foucault, have regarded this as risking the anachronistic introduction of a contemporaryÂ social constructÂ of sexuality foreign to their times, though others challenge this. The study says that no one is experienced homosexuality as an exclusive, permanent, or defining mode of sexuality in the middle ages.Â

We go through this view transformation are essential for some time. Homosexuality demand of individualism rather than social morality. The conclusion is when we taking this issue positive or negative. Transformation is essential for some time. It clearly shows, the policy and legal debates conducting for homosexuality involve fundamental issues of morality and justice.

To Get More Legal Judgments In India...DOWNLOAD OUR APP